By Jel - October 14, 2019
Logging, just so I can keep up with the number of cycles we've been trying. Skipped the first cycle after my miscarriage in May as advised and been trying since then with no luck. We're now at the point where we're considering when to stop trying... for example when the gap between child 3 and a possible child 4 would be too large, for us.

CD12 was predicted to be my ovulation day. Didn't actually test so don't know. BD on days 11 and 12... didn't count anything else. Fair amount of EWCM throughout the month.

CD25 Fitbit has me on a 25 day average cycle, so waiting on my period today. Sometimes it likes to arrive in the evening.
Post a Comment
Read more

By Jel - June 25, 2019
Monday, four days after my blood test, I returned to the hospital for my followup hcg test, and Tuesday I heard back from another doctor about the results. It had dropped from 1600iu to 100. He told me they normally follow it down to 0 but they were happy with my results and that my bleeding had almost finished by then so suggested i take a home pregnancy test in a week to ensure it was negative.

The rest of the bleeding followed a normal period. The difference was if I ran, it felt like a postpartum bleed in that i could feel the flow become heavier.

I took the test the following Monday and confirmed it was negative.

From an ovulation test, i think i ovulated shortly after the bleeding finished. Now just waiting for my period before we start trying again.
Post a Comment
Read more

The story of my miscarriage

By Jel - June 15, 2019
5 weeks and 4 days.
Everything was normal in the morning. Took my daughter to daycare, downed a glass of water or two at work then had to visit the loo. That's when I noticed I had started spotting, on the toilet paper. Pink spotting within clear mucus. I thought it may have been due to sex irritating my cervix and thought I'd keep an eye on it.

An hour later it had turned to pinky-red bleeding. I was more concerned at this stage and debated whether i should visit the hospital for an anti-d shot. I rolled up some toilet paper to use as a makeshift pad as i didn't have one and thought I'd revisit again in an hour.

I stood up from my desk and realised things felt far wetter than they should. I hurried to the ladies and when i pulled down my underwear, swore quietly. My wad of toilet paper and my underwear were soaked and blood started running down my legs and splashing onto the floor. I sat down very quickly and cleaned up the floor and my legs and then, my body bore dow…
Post a Comment
Read more 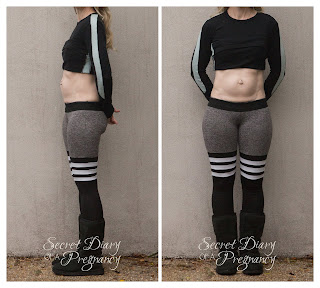 How big is baby: Your tiny baby is 9mm, about the size of a little fingernail now.

What is baby doing this week: Your baby’s hands and feet are still just little buds. Their skull bones close around their tiny, primitive brain.

The outer layer of the cushiony amniotic sac develops into the placenta. Its cells grow deep into the wall of your womb, creating a rich blood supply.

Your placenta will give your baby nutrients (food) and oxygen through their umbilical cord.

It has three vessels: One thick vessel carrying oxygenated blood and nutrients to the baby (they won’t breathe through their lungs until they're born - which is why waterbirths are safe), and two thinner vessels that carry blood containing waste-products back into your circulatory system.

The placenta is a remarkable lifeline that also keeps bacteria and viruses away from your baby. 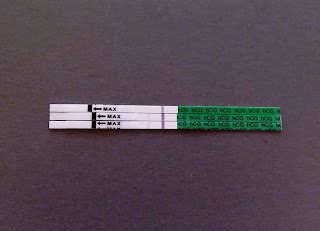 But, there was odd cramping/tummy upset from CD24, and no period. Tested on CD28, and 2 lines appeared - but the next day after two negative test results, I realised that first test was an ovulation test :(

CD29 - tested twice (due to confusion above), nothing on first test, faint line on second.

CD30 - faint BPF, stronger than yesterday! Will test again in 2 days, should be enough hCG by then.

I did do 2 OPKs, but forgot to note the dates. The first was sometime after the 12th as I forgot, but it was positive. The second was negative.

I took a pregnancy test 2 days before my period was due... and got a faint positive. Sadl…
Post a Comment
Read more

By Jel - February 20, 2019
Cycle 4 of baby #4. My last few cycles have been 26/27 days, but this one was 23 days. I'm going to look into ways of increasing my luteal period, although I don't know for sure if that's the part of my cycle that is shorter. I intend to buy some ovulation tests for this period so can hopefully pinpoint it a bit better. This is the final month we can try for a 2019 baby, as next month's due date would be too close to Xmas day.


CD1 - AF arrived in the evening.
CD25 - AF arrived in the evening. Blah. Now we have to miss a month (EDD 20th Dec, too close to Xmas/New Years for my liking) and the gap between kids is getting wider. Add to that I'm getting older... Now I will be 42 when the next baby arrives and that's a scary thought. Should have started earlier... Too late now but my thoughts keep going back to that.
As a reference, bub 1 took 2 months to conceive. Then 3 months, 5 mon…
Post a Comment
Read more
More posts